Read my interview with RIT alumnus Neil DuPaul on the Veracode Blog where we discuss how we’re increasing information security awareness at the Rochester Institute of Technology. What do you think of the cards?

Each year at the Rochester Institute of Technology we introduce the concepts of Digital Self Defense to incoming students. We’ve tried a variety of presentation types and venues, ranging from several sets of co-presenters talking with “smaller” groups of students to one presenter in front of the 2000+ students at our Gordon Field House.

We kicked off our activities this year at New Student Move-in Day with our table of resource materials and a guest appearance by Phishy. Phishy provides a visual reminder for students to watch out for phishing attempts. Quite a few students posed with Phishy for photos. 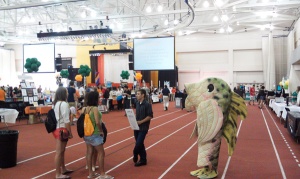 Because we’ll have captionists and ASL (American Sign Language)  interpreters, we’ve added 3 seconds to each slide. As in other Lightning Talks, the slides will advance automatically, every 18 seconds. I’m the only one of the presenters who’s done a Lightning Talk, and I’m looking forward to seeing how each presenter deals with the challenge of a very large (~2500) audience and a slide deck they don’t control. 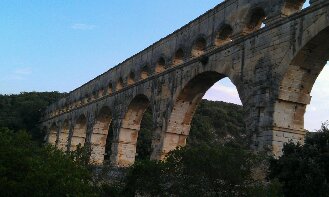 This past fall we had the privilege of visiting Pont du Gard, a Roman bridge and aqueduct in Languedoc in the south of France. Although built primarily without mortar (except for the top course of blocks), Pont du Gard has endured for more than 2000 years, despite frequent spring floods.

The Pont du Gard aqueduct/bridge was built to provide clean water for the town of Nimes. Its builders understood the importance of building a structure that took into account the factors that would affect the bridge. They understood at least some of the pressures that would bear on that structure. They built the bridge accordingly. Its builders designed it to endure.

Much of my role as a technical communicator has been to build processes that enable the flow of good communication. I’ve had to factor in the context (pressures that will bear on the structure) in which I was building those processes. Those communications processes are the bridges (aqueducts) that I build. In distributed organizations, well built communications bridges are critical to the health of the organizations.

Over the next few weeks, I’m going to talk about bridge building.  First, I’ll discuss my initial attempts at architecting communications processes for a Fortune 500 organization that had outsourced key support processes in the midst of a major software/hardware infrastructure transformation. Next, I’ll discuss communications processes I’ve built in my role as an information security practitioner in higher education. Finally, I’ll talk about my current work to build a sustainable communications bridge that enables clear communications between a central organization and its distributed communities, ensures the concerns of those distributed communities are heard, and facilitates best practice sharing among those communities.

The brilliant Hannah Morgan and I presented Bullet Proofing Your Career Online at the STC Rochester Spectrum Conference. We’ll be presenting again at the STC Technical Communications Summit in Rosemont, IL in May. You won’t be able to experience our incredibly witty repartee, but I’ve embedded the slides below.

It’s been a little less than two weeks since the Society for Technical Communication Summit in Sacramento ended. Summit was an intensive four day immersion in the multifaceted profession of technical communications. I wanted to share what I found really important about the event, before the memories fade. I’ll start unpacking my takeaways here and in future posts.

I hope you’ll take the opportunity to discuss what I’m unpacking and share what you unpacked when you got home by commenting on this post!

Like Loading...
I attended RIT’s Faculty Institute for Teaching and Learning this week. Mark Greenfield, SUNY Buffalo, delivered a keynote on “Born to be Wired: Technology, Communication, and the Millennial Generation.” There was a lot of useful content, and I encourage you to follow Mark Greenfield on Twitter (@markgr) and check out his resources posted on Delicious.
Among the many things Mark discussed was the ongoing issue of Facebook privacy settings and how difficulty they are to administer properly. He shared Rob Cottingham’s recent Noise to Signal Cartoon with us.

Rob Cottingham had done an earlier cartoon on the subject as well:

Rob Cottingham was inspired by the famous Peter Steiner cartoon.

Does any of this matter to you?

I can only wonder what the next cartoon will be.

Last year, I kicked off this blog by posting about Twitter Use at the #STC10 Summit in Dallas. I thought it would be interesting to look at Twitter use at #STC11 as well.

I’ve only analyzed results from May 13-21, 2011. However, use of the #STC11 hashtag occurred for months preceding this year’s Summit conference. (This is a departure from last year, when the use of tweets with the #STC10 hashtag started much later.) Because my Google RSS feed for #stc11 was unable to handle the volume of tweets this year, I relied on three sources for this post:

Here’s a Wordle of the tweets containing the hashtag #stc11 from 5/13 through 5/21/11. If you’re unfamiliar with Wordle, it produces a wordcloud where the frequency of word usage determines the size of the words in the graphic.

Karen Mardahl*(@kmdk) began curating the #STC11 tweets in late April. The two graphics and lists below are taken from her archive. 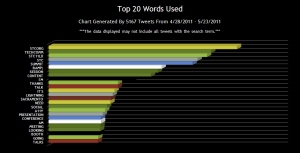 Again, contrary to some expectations, “beer” was not the most commonly used word in the tweets appearing only 13 times. (This was the same number of occurences as #stc10, but a much lower frequency.)

I’m not sure if there’s any correlation, but “karaoke” also appeared 14 times. The last two years have seen almost equal occurrences of beer and karaoke. Coincidence? I don’t think so!

Just like last year, Twitter provided a sense of community and a “conference within a conference.” Most tweets were positive, implying that many of the Twitter users enjoyed the conference.

I spent much of the conference meeting F2F with Tweeps gained from #stc10. If you’re not using Twitter at conference, I urge you to do so. You’ll find that it will create a new sense of comraderie with other Tweeters, and besides, that’s where all of the really cool STC people hang out!

I’ve curated the tweets into a 341-page MSWord document. This “raw” data is available upon request.

What are your thoughts and observations?

Vanessa Wilburn put together a more detailed analysis of the Twitter usage at #STC10. Her work focuses on the subject matter of the tweets. She found that after removing the “chitchat,” the twitter streams paralleled the key topics of the conference and that many of the tweets relayed content from or observations about specific sessions.